Saka – the pearl of the coast - Ida-Virumaa
Menu
No products in the cart.
€0,00 Cart

Saka – the pearl of the coast

Saka manor, which is located on the limestone coastal line, still witnesses the nostalgic descendants of the last owners of the estate, representatives of blue blood, who appear here from time to time. But everyone who comes here may be sure that they will be treated like nobles.

The estate complex in Saka is, of course, a legacy of the Baltic Germans, but no first-class restaurant, luxurious ballroom, suite rooms furnished in the style of the epoch, wellness SPA or exceptionally well-groomed park area would be possible here if the current owner Tõnis Kaasik did not suffice for the glory of the former estate which used to be on the verge of complete destruction.

For ten years – to touristic attraction

In Soviet times, the estate was managed by border guards, who left the ruined mansion and neglected park. In 2001, Tõnis Kaasik bought a manor that was standing in ruins and over 10 years rebuilt it into a touristic attraction.

The heart of the estate and its surroundings are in perfect order, as evidenced by the two Presidential awards granted for a beautiful home. At the same time, all Estonian presidents of the period of restored independence stayed in Saka. The manor house, aged a century and a half, built in the modern style, also accommodates a Suite of the Head of State. The furniture was imported from England, and even the beds and wardrobe, with their rich wooden decorations, are a worthy sight in themselves.

Saka manor is not the native nest of Tõnis Kaasik, but it is, undoubtedly, the work of his life. There is a well-known story about the geographer, conservationist and former Minister of the environment who first came to Saka as a student when he was writing a research paper on the waterfalls of Northern Estonia. Photographing the Saka cascades ended with the young man being arrested by border guards. He finished his thesis with the words: „Saka deserves to be better off.“

Tõnis Kaasik kept his word. As Saka is a place full of powerful wonders which come together there: the limestone coast as a natural value and the estate as a cultural value.

At the same time, the owner of the estate also put former military facilities in order: the border searchlight tower became a marine tower with conference rooms, the army warehouse – turned to a camping house along with public toilets and showers for travelers with caravans. A stage for singing has been built in a former rubble quarry that was used as a garbage dump. It has become a favorite cite for summer concerts and performances.

An integral part of the estate ensemble is a park area with century-old trees, paths and swings, where the surroundings are enlivened by pavilions and gazebos with columns. The owner of the estate put his heart in an open-air exhibition that introduces the Baltic Klint. It is called the ’Road of time’, consists of stone placers the size of a boulder and gives a cross-section of the Geology of Estonia.

The best-known county nature guide Enn Käiss loves to ask one question here: what is it there, on the field and mostly next to the nature conservation sign? A boulder. And why is it a boulder? Because this is the first Finnish humanitarian aid that arrived 5,000 years before the Estonians themselves.

The manor has been in Saka for almost 400 years and was built after the King Gustav II Adolf of Sweden donated the land there to Jürgen Leslie from Scotland. Leslie was the mayor of Narva for over twenty years, but lived mainly on his premises in Saka. The last owners of the manor, Löwis of Menars, also had Scottish roots and left Estonia on November 2, 1939.

A Bow to the Baltic Germans

The monument erected on the limestone bank of Saka-Ontika is a 6.5-meter-high metal window open to the sea. Three bronze storks fly out of the open window. The German national birds appear very impressive on the high limestone bank, symbolizing the thousands of families who had to leave their homeland on the eve of World War II.

Heiner fon Löwis of Menar, who was 2 years old when the family moved from Saka to Germany, is grateful to Tõnis Kaasik both for installing the monument and for saving the manor. „It’s just incredible how he put everything in order here and breathed life into the estate. I am often asked whether I feel sad when I come to Saka. No, I only feel a sense of gratitude,“ he said at the unveiling of the monument.

The first meeting of adult Heiner fon Löwis of Menar with Saka took place at the end of the Soviet era, when the main building of the estate was in very poor condition. Then the former descendant of the owners came to their Penates more than once. He came here himself, and he brought participants of cultural trips, held meetings of relatives. Currently, about 35 people carry the surname Löwis of Menar. There are scientists and doctors, politicians and journalists among them.

Of course, noble guests prefer to stay in a manor house, but Saka Manor is a caring host and every holidaymaker can find affordable accommodation there. The accommodation on offer varies from camping to a spacious suite. Between the two extremes there are caravan accommodation, camping rooms and three-star hotel rooms in the auxiliary building, where officers’ apartments were once located.

The restaurant with vaulted ceilings in the manor house is open to everyone, not just to those staying in the manor. As the restaurant of Saka manor is known all over Estonia for its delicious food, it is recommended to announce your arrival and book a table in advance. A little tip: customers’ favorites are beef tenderloin with potato gratin, woked vegetables and red wine-juniper sauce.

The restaurant also offers picnic baskets for al fresco dining. You can find a suitable place either in the manor park or on the sandy beach below the hotel, which can be reached by stairs.

From the stairs you can take a look at the lush klint forest, which has also been baptized as a Nordic rainforest. Saka Beach is one of the favorite places for nature photographers. Just think that 15 years ago this beauty could only be seen from a limestone bank 50 meters high.

Nature lovers who want to walk along the hiking trail will receive a map from the hotel that leads down to the beach, moving next to the Kivisilla waterfall with a powerful water play and back to the bank.

The hiking trail, which is only two kilometers long, currently offers physical workout thanks to the stairs. However, it is not the leg muscles that have the greatest load, but the eye muscles, which have to work hard to absorb all this beauty. That of nature and created by humans. 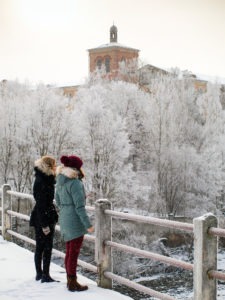 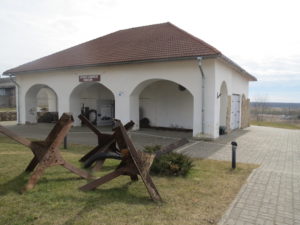 Vaivara Sinimägi Museum, located on the battlefield with the most casualties in Estonia, is small, but despite its size, great things are done there. The 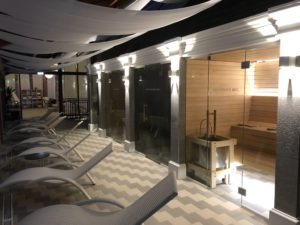 The former owners of the Mäetaguse manor, the von Rosens, admire their former possessions from the clouds above, but their name lives on as a