Explore the longest sandy beach in Estonia - Ida-Virumaa
Menu
No products in the cart.
€0,00 Cart

Although the sandy beach, dunes and pine forest create ideal conditions for holidaymakers to enjoy summer pleasures, the northern coast of Lake Peipsi (or Peipus) was discovered as a summer resort relatively recently. But now holidaymakers are not eager to let it out of their embrace.

There are sea resort people and lake holiday people. The beach of Lake Peipus is a compromise for both camps. In the first place, the soft sand and beach pines make you feel like you are by the sea. Secondly, the other bank is inaccessible to the eye. It is especially nice that the water of the lake is warm in summer, sometimes reaching 26 degrees. However, the slowly deepening bottom raises the shares of Lake Peipsi in families with toddlers.

In order for the most famous of Peipsi beaches – Kauksi beach – to meet the expectations of today’s holidaymakers, the municipality has built a promenade there with boardwalks running along the dunes, stairs leading to the beach and observation platforms. Sports fans can enjoy volleyball courts, children swings and a climbing area. With the completion of the beach building, proper toilets and showers will also be created on the beach, and additional possibilities for dining will be added.

Locals have noticed that with the development of the beach, people began to come here not only for swimming and tanning. Previously, it was difficult to move along the dunes, but now it is so nice to step on the boardwalk, sit on the observation decks and enjoy the wonderful views. People come here just to walk, sit, and swing.

A long distance from the official beach is the camping area established by the State Forest Management Center (RMK). The stairs and observation platform built to protect the Kauksi dunes have just been replaced there, and the popular holiday resort has also got a fresher look.

The sandy beach flows in a continuous chain from the Kauksi to Vasknarva. In Kauksi and Kuru, it is worth to tune your ears, because the sand there is believed to be singing.

Anne-Ly Feršel, a resident of Kuru village and a specialist in environmental education by profession, says that the reason for such phenomenum is the composition of silica, which whistles and crunches when you move on top of it. „Over the past 50 years, most of the beaches worldwide have lost their singing treasure, especially in developed countries where water is contaminated with salts, oils and dust. In other words, singing sands show the purity of the water and beach.“

Preserving the ’singing’ ability of the Peipus sand is important not only as a symbol of unpolluted nature, but also in the name of ensuring that beautiful legends do not die. In one book, called „The history of our villages. Kauksi and the village of Kuru from ancient times to today“ tells how in ancient times in the waters of lake Peipus a mermaid with watery eyes and sandy hair lived.

„A young fisherman fell in love with a beautiful woman who fell into his net. Love won their hearts, but according to the order established by the heavenly master, a person should not love a mermaid. In a fit of anger, he turned the mermaid into sand, forever forbidding her to talk to people. But he didn’t forbid her to sing. To this day, the unfortunate mermaid, who is destined to remain forever sand, sings to the people who step on it.“

Try to rub the sand with your foot and listen to what song it is singing. I dare say it will sound a little different each time. But what hasn’t changed a bit is my favorite view of the slender pines that rise on the crest of the dunes and the vast expanse of lake water that opens from the terrace of a cafe in the recreation village of Kauksi.

Standing right on the shore of lake Peipus, Kauksi holiday village is an amazing place with a rich historical past and present. In 2019, the popular trilogy „The Reunion 3: Godfathers“ was released, its last part was partially filmed in Kauksi.

It was in the holiday village that the episodes of the tantric camp were filmed. In the 1960s, during the Soviet-era, there was a traditional tourist base in Kauksi. Holidaymakers with a voucher were provided with food and accommodation in a tent, and the flag of morality was kept high.

„The tents were for 4 people, but the married couples were not put together. Sometimes, two couples could get accommodated in one tent. But if they were of different names, they could not be accommodated together – it would have been a crime!“ recalls Hilju Pärn, who first worked in the canteen of the tourist base, later as a warehouse keeper and maintenance manager. The tents were made of tarpaulin on a wooden frame and were button-closed.

You can also find out in the book about Kauksi and Kuru villages that in 1966, for example, the Kauksi tourist base received 150 hikers with and 30 without vouchers. In the evenings, films and cultural events were organized for tourists. There was a volleyball and badminton court, you could play table tennis, crown and billiards. Boats and pedal boats could be rented for fun-ride. Hiking skills were taught, boat trips and trips to the surrounding area were organized.

The tourist base even had its own library, post office and telephone booth. The doctor was also present on site. Morning exercises were a tradition, and they were held for the whole camp at once. The music was put on playing and an inspector on duty carried out the gymnastics. Holidays at the official tourist base were like a pioneer camp.

If in Soviet times the possibilities of staying overnight in Kauksi were quite limited, now there is accommodation to every taste and pocket. The Kauksi holiday village still has a place for a nostalgic and simple overnight stay, but new houses with all the amenities have also been built on the coast.

A good option for those who are looking for the atmosphere of a tourist farm and do not expect that right from the room you will step into the lake, is the Kauksi holiday house, where you can spend the night all year round and eat healthy food.

Kauksi holiday house has been operating since 2000, and Piret and Ivar Talistu started their travel business from scratch. They had moved to the inherited farm, and they needed something to do. On the beautiful coast of lake Peipus, it would be strange not to turn your eyes to tourism. At present, it is hard to believe that a large plot with a well-maintained pond was an abandoned estate with no roads. Now there are five comfortable holiday homes and even a smoke sauna. Piret has been chosen the best caterer of the Viru food competition, because she can successfully cook from local produce.

You can find accommodation facilities on the way further from Kauksi too – a range varies from camping areas to villas. Different sources indicate 30 kilometers as the length of the northern coast of Lake Peipsi. What could a holidaymaker do with this knowledge? The fact that if Kauksi beach is crowded on hot summer days, you can continue your search as far as Vasknarva – a private place is guaranteed in any case.

If you drive to Smolnitsa near Vasknarva, you will see especially powerful dunes, up to 15 meters high. In Vasknarva, however, the mysterious ruins of the Order Castle and the River Narva, which makes a curve here when coming from Kauksi, compensate for the longer drive. In fact, we can’t talk about driving problems, because the road by the lake offers enjoyable views from the car window and gives a good overview of the cottage culture through the ages. 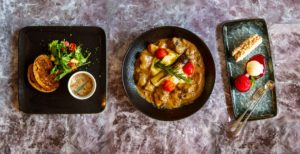 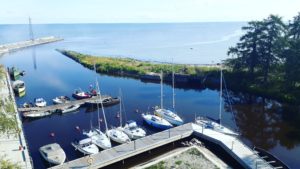